The First Female Member of Parliament 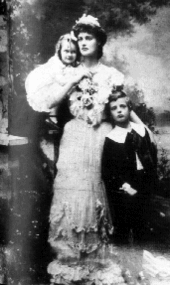 The media in the U.K. often repeat the common error of referring to Nancy Astor as the “First female member of parliament.” This distinction actually belongs to Constance Gore-Booth, The Countess Markiewicz, who in the December 1918 general election, was elected for the constituency of Dublin St Patrick’s as one of 73 Sinn Fein MPs. This made her the first woman elected to the British House of Commons.

She did not take her seat and along with the other Sinn Fein TDs formed the first Dail Eireann. She was also the first woman in Europe to hold a cabinet position (Minister of Labour of the Irish Republic, 1919–1922).

When her husband Waldorf Astor went “upstairs” to the House of Lords, Nancy Astor decided to stand in Plymouth Sutton in his place. She won the election in November 1919, beating her main rival, Liberal Isaac Foot – the father of Michael Foot who of course went on to lead the Labour Party. Thus, Lady Astor became the first women to take her seat in the House of Commons. Incidentally, her maiden speech on the evils of excessive drinking could probably be dusted off and re-used today!

The Countess Markiewicz who was the first female MP was also a suffragette and like Nancy Astor a member of the aristocracy but there are few other comparisons except that they both led extraordinary lives.

Constance Gore-Booth was born into a famous Anglo-Irish family on Feb. 4, 1868 at Buckingham Gate, London. Her father, Sir Henry Gore-Booth was an explorer and philanthropist with a large estate at Lissadell in Co. Sligo. The Gore-Booths were known as model landlords in Sligo. During the famine of 1879–80, Sir Henry provided free food for the tenants on his estate in the north west of Ireland. Perhaps being raised in this atmosphere of concern for the common man had something to do with the way Constance and her younger sister Eva would conduct their later lives. Their privileged position as members of the land owning Anglo-Irish Ascendancy contrasted with that to the lives of the poor dispossessed Irish families along the western coast must have affected them as well. Eva would become an advocate for labour and women’s suffrage in England, and Constance would become the most famous women of the Irish revolutionary movement.

A frequent guest to their estate at Lissadell, Co. Sligo was a young W.B. Yeats. Later, after their deaths, in a poem he would capture the atmosphere he recalled of this great house and its two daughters.

“The light of evening, Lissadell,
Great windows open to the south,
Two girls in silk kimonos, both
Beautiful, one a gazelle.”

Her Polish title derives from her marriage in 1901 to Casmir Markiewicz in 1901 when she was pregnant with their child. He left Ireland in 1913 to live back in the Ukraine and she was estranged from him and later their daughter Maeve until just before her death in 1927. After training at the Slade School of Art in London she settled back in Dublin in 1903 and helped found the United Artists Club to bring together nationalist leaning Artists and Literary figures including W.B. Yeats great muse, Maude Gonne, with whom she was involved in the Abbey Theatre. She became involved in the Gaelic revival and made the acquaintance and was influenced by many figures in the Irish Nationalist movement. In the 1908 British Election she went to Manchester, where her sister Eva had settled as a leading Suffragette, and stood unsuccessfully against Nancy Astor’s great nemesis Winston Churchill. 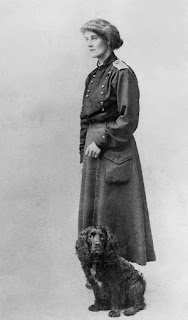 The year after in 1909 Markiewicz founded Fianna Eireann, a para-military organisation outwardly similar to Baden Powell’s Boy Scouts which instructed teenage boys in the use of firearms. She was jailed for the first time in 1911 for speaking at an Irish Republican Brotherhood demonstration organised to protest against George V’s visit to Ireland. Markiewicz also joined the Irish Citizen Army (ICA), a small volunteer force formed by the Scottish socialist James Connolly, in response to the lockout of 1913 to defend the demonstrating workers from the police. Markiewicz held the position of an officer, above the rank-and-file members making her a decision maker, and more importantly, able to carry arms.

As a Lieutenant in the Irish Citizens Army she was one of the leaders of the Easter 1916 Rising in Dublin where the rebels occupied strategic buildings. The counter attack by British forces under General Maxwell resulted in widespread destruction. Markiewicz was second in command to Michael Mallin in St. Stephen’s Green. She supervised the setting-up of barricades as the rising began and was in the middle of the fighting all around Stephen’s Green, wounding a British sniper. Eventually under attack from British forces they retrenched to the College of Surgeons where Mallin and Markiewicz and their men would hold out for six days, finally giving up when the British brought them a copy of the leader of the rising, Padraig Pearse’s, surrender order. 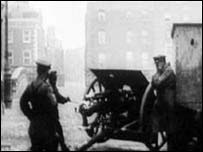 The rising was not generally supported in Ireland and especially not in Dublin which had witnessed widespread destruction as well as 132 dead among the British forces and the police and 318 Irish deaths, mostly civilians. Prisoners were jeered after the surrender, and executions were demanded in motions passed in some Irish local authorities and by many newspapers, including the Irish Independent and The Irish Times. This is not too surprising given the atmosphere of the time with thousands of Irish soldiers fighting as volunteers in the British Army in the war against Germany and the general view that by striking in time of war the rebels had committed treason.

For an insight on the schism caused in Ireland by World War 1 see; 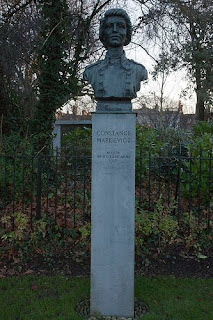 However, the number and swiftness of the executions, combined with the arrests and deportations and the destruction of the centre of Dublin by the artillery, led to a surge of support for the rebels. Of the ninety originally sentenced to death at summary trials by military courts without representation or rights of appeal, fifteen of those (including all seven signatories of the Proclamation of Independence) had their sentences confirmed by General Maxwell and were executed by firing squad between 3 May and 12 May (among them the seriously-wounded Connolly, shot while tied to a chair because he was too weak to stand). At her court-martial Markiewicz told the court, “I did what was right and I stand by it.” Her conviction was not in doubt, only her sentence. She was sentenced to death, but General Maxwell commuted this to life in prison on “account of the prisoner’s sex.” She told the court, “I do wish your lot had the decency to shoot me”. 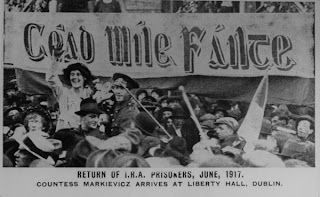 The Countess was released from prison in 1917, along with others involved in the Rising, as the government in London granted a general amnesty for those who had participated in it. It was around this time that Markiewicz, born into the Church of Ireland converted to Catholicism. Markiewicz was in Holloway prison when her colleagues assembled in Dublin at the first meeting of Dáil Éireann, the unilaterally-declared Parliament of the Irish Republic. 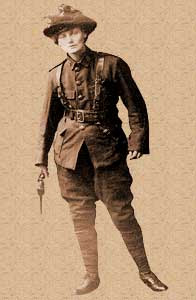 When her name was called, she was described as being “imprisoned by the foreign enemy” (fé ghlas ag Gallaibh). She was re-elected to the Second Dáil in the House of Commons of Southern Ireland elections of 1921.Markiewicz served as Minister for Labour from April 1919 to January 1922. She left government in 1922 along with Eamon de Valera and others in opposition to the Anglo-Irish Treaty which resulted in the Partition of Ireland and the British King remaining as nominal head of state. She fought actively for the Republican cause in the Irish Civil War and after the War she toured the United States fund raising. She was not elected in the 1922 Irish general election but was returned in the 1923 general election for the Dublin South constituency. In common with other Republican candidates, she did not take her seat. However her staunch republican views led her to being sent to jail again. In prison, she and 92 other female prisoners went on hunger strike. Within a month, the Countess was released.

She joined Fianna Fail on its foundation in 1926, chairing the inaugural meeting of the new party in La Scala Theatre. In the June 1927 general election, she was re-elected to the 5th Dail as a candidate for the new Fianna Fail party, which was pledged to return to Dail Eireann, but died only five weeks later, before she could take up her seat.

She died at the age of 59, on 15 July 1927, possibly of tuberculosis (contracted when she worked in the poorhouses of Dublin) or complications related to appendicitis. Her estranged husband and daughter and stepson were by her side. When Countess Markiewicz was taken to the Republican plot at Glasnevin Cemetery in Dublin for burial, it was said that as many as 300,000 people turned out on the streets to bid her goodbye. At the graveside, Eamon de Valera, the Fianna Fail leader, gave the funeral oration.

In his poem “Easter 1916” W.B. Yeats who was on the other side to her “die hard” republican politics aptly captures the change in Constance Gore-Booth and in Ireland since his earlier visits to Lissadell.

“That woman’s days were spent
In ignorant good-will,
Her nights in argument
Until her voice grew shrill.
What voice more sweet than hers
When, young and beautiful,
She rode to harriers?”

“Now and in time to be,
Wherever green is worn,
All changed, changed utterly:
A terrible beauty is born.”

Perhaps the life of this privileged aristocrat who became a Suffragette, a Revolutionary, a Military Commander and the first women MP and Minister is best summed up by the playwright Sean O’Casey, who quit Connolly’s Citizen Army in a dispute with Markiewicz, who once said of her: “One thing she had in abundance — physical courage, with that she was clothed as with a garment.”

When seeking history’s female heroes, maybe the remarkable story of Constance Gore-Booth, The Countess Markiewicz, should be in the reckoning? 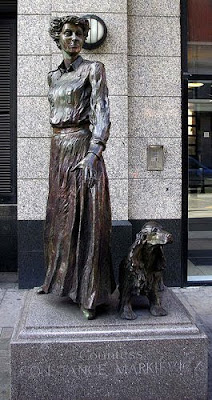