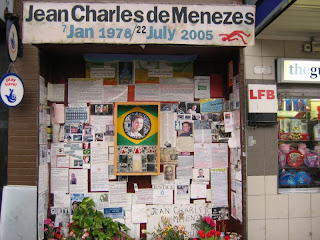 Jean Charles de Menezes was shot dead by Metropolitan Police firearms officers at Stockwell Tube station, London, on July 22nd. 2005. Bizarrely the Met(as the Metropolitan Police or Scotland Yard are commonly known) is being prosecuted under English Law not for Murder or Manslaughter but under Health and Safety legislation for failing to protect the health of Jean Charles de Menezes and members of the public who were exposed to danger in the operation. Indeed.

The details revealed so far in court are of a 27 year old electrician peacefully going to work unaware he was being trailed, not being intercepted as a possible suspect, getting on and off two buses, wearing jeans and a T-shirt and a light jacket with no baggage or possibility of concealing anything on his person, going routinely through station barriers and pausing to pick up a free newspaper, taking his seat on a tube train.

There he was held without challenge by a police officer who immobilised him by holding his arms around him in a vice like grip whilst his two colleagues fired 7 special “124 grain” dum-dum style bullets into his head at point blank range. The details of this killing have appalled and dismayed the public in equal measure and common sense would suggest these feelings will not be addressed by a prosecution under “Health and Safety” legislation – this being somewhat beyond satire. I think we can take it as read that if you kill somebody wrongly you have not protected their “Health and Safety.”

Scotland Yard have real issues to answer about the apparent ineptness of the operation and about the large amount of uncorrected disinformation disseminated afterwards from the Commissioner downwards that this innocent persons’ killing was “related to the ongoing terrorist situation”, that he behaved suspiciously, ran away from officers, vaulted over ticket barriers and was wearing “bulky clothing”. As none of this was true, where did it come from?

Hindsight is a great teacher, it is always a pity we don’t have it beforehand, but there is another side to this sad story. Fifteen days previously on the 7th July 2005 4 suicide bombers had detonated 3 bombs on the Tube and one on a London bus. They killed 52 people (and themselves) in the biggest mass murder in peacetime Britain. The roll call of the dead is heart rending encompassing a typical cross section of Londoner’s going about their day, young and old from every continent, colour and religious persuasion including a 19 year old Muslim girl on the threshold of her life. Of the 4 “brave” martyrs one was a 19 year old Jamaican Muslim convert who lived near me in Aylesbury and who took 26 lives on a Piccadilly Line train between Russell Square and King’s Cross. What did a 19 year old know about life and what sort of crypto fascism justifies this cruel obscenity towards people you do not know but look in the eye before killing and maiming them? Maimed indeed for as well as the dead there were over 300 injured, some who lost limbs and eyes and some who will never live independent lives again.

I was in London that day and for a number of days afterwards spent afternoons and evenings helping people cope with the transport disruption. Two things were palpable. one was the great determination that London would not be brought to its knees by what happened, there was the quiet unseen courage of the Tube and Bus drivers who climbed into cabs at dawn the next morning and in their own way said “let’s Roll!”. The sense of determination was shared by the public who displayed stoic courage by insisting on going about their everyday business and not being terrorised even if it meant walking halfway across London to work.

Nerves were of course there under the surface but they had recovered somewhat when exactly 2 weeks later on the 21st July 2005 there was almost a carbon copy attempt of 4 suicide bomb attacks on the transport system in London by fanatics equally determined to destroy their fellow unknown human beings. This second attempt nearly succeeded and only failed because they had made a small error in the formulation of the homemade but deadly explosives they attempted to detonate. This second attempt was a great shock to the system, to the morale of Londoner’s and no doubt to the security services who felt they had bottomed out all the leads and had stabilised the situation.

Now along with all of London they were looking into the abyss and not knowing what they were looking at or where the next threat would come from. What is happening and how many more are out there? – was the general public feeling. It was Jean Charles de Menezes great misfortune that he lived in a block of flats which was also the address of Hussain Osman, one of the failed suicide bombers from the day before and he was not entirely dissimilar in appearance given the limited identification information the police had to go on.

No doubt these court proceedings and further inevitable investigations will draw their own conclusions and I’m not attempting to anticipate them, but I make two observations of my own.

One is that society as a whole is not pacifist. We expect that the welfare of all is protected and logically that means we assent to people killing on our behalf. So we agree an Army is maintained and we expect it to kill and its troops to accept the possibility they will also be killed in combat. If an embassy is besieged, if a plane is hijacked or if a deranged gunman walks down the street killing at will we expect somebody to deal with the threat on our behalf. And if a suicide bomber is apprehended before he can blow us up we expect they will be killed. On the morning of the 22nd July 2005, the Met, a civilian police force had called in all the help it could get from the Defence and Security services and was trying to cover an impossible number of bases not knowing where the next threat was or where it would come from. Wherever fault lays in this sorry story it does lay with the three armed officers acting under orders who entered a Tube train to stop what they thought was Hussain Osman detonating a bomb.

The second point is who those of us who live and work in London felt that morning. Shamefully, I can remember my reaction was “Good on them, they got one!” and I can tell you in feeling that I was in a majority of, well, everybody. For at that stage, below the surface, there was a palpable sense of fear about town. And that is the point of the sheer obscenity and ruthless cruelty the suicide bomber. It desensitises all of us and for the sake of our protection makes us accept in our heart that which we would not normally accept in our head.

That desensitivity is something we all must fight against because otherwise the bomber has won and that must and will never happen. In this case it means we must, however difficult it may seem, try to do two things. Respect the memory of Jean Charles de Menezes and the grief of his family and respect the courage of the Police Officers who, out of a profound sense of public duty, did the unthinkable on all our behalves.