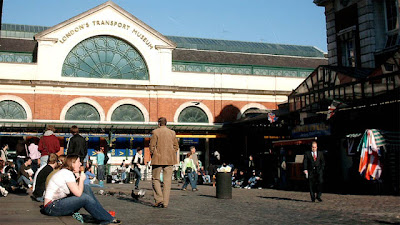 It is always good when you meet an old friend again and after a two year closure for refurbishment my favourite museum, London’s Transport Museum housed in the listed Floral Hall in London’s lively Covent Garden, has reawakened from its long slumber looking even more attractive than ever. 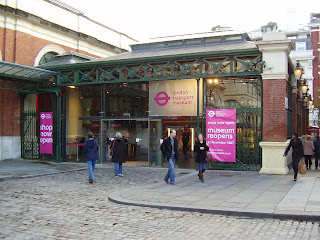 The first section of the London Underground opened from Paddington to Farringdon on 10 January 1863. A second underground line, the District, began operating five years later. The two were eventually linked to create the Circle line in 1884. The early underground was a huge engineering achievement and very well used, but had one big disadvantage. Its steam locomotives created a permanent sulphurous fug in the stations and tunnels!

For the full story see;

The modern story of Covent Garden began in the 1630s when land formerly belonging to Westminster Abbey, ‘the Convent Garden’ was redeveloped by the 4th Earl of Bedford. Today overlooked by the Royal Opera House the former vegetable & produce market has been restored to a thriving urban hub with numerous shops and street theatre, particularly on the Piazza in front of Inigo Jone’s St. Paul’s Church at the western end. At the other end of the piazza you come to London’s Transport Museum. 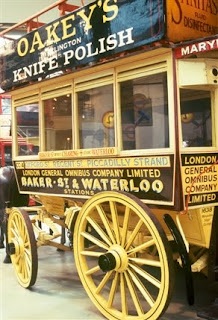 This museum is child friendly with the opportunity to “drive” a tube train and speak to the “tunnelers”. It tells the story of how the Tube, trams and Buses made the world’s first mega-city possible – it is a refreshing antidote to the hideously overpriced theme park type attractions which set out to entrap visitors to London. It is £8.00 for a full adult tickets but under 16’s get in free making this a good value family trip to the Museum, The Museum Shop and the Upper Deck Cafe Bar nattily upholstered in the same distinctive moquette fabric used in the buses and trains in London. 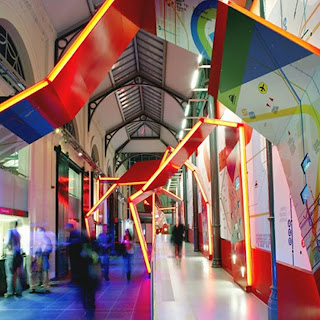 The new Museum reopened on 22 November 2007 after a two year, £22 million refurbishment and redesign project. It tells the story of the development of London, the first modern “mega-city”, its transport systems and the people who travelled and worked on them over the last 200 years. As well as exploring the past, the new Museum also looks at future transport developments and how transport has shaped five other world cities – Delhi, New York, Paris, Shanghai and Tokyo. 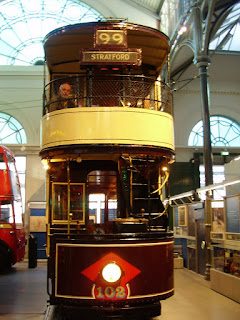 London Transport Museum’s collection originated in the 1920s, when the London General Omnibus Company decided to preserve two Victorian horse buses and an early motorbus for future generations. The Museum of British Transport opened in an old bus garage in Clapham, south London, during the 1960s, before moving to Syon Park in west London in 1973 as the London Transport Collection. In 1980, the public displays moved again, this time to occupy the Flower Market building in Covent Garden as the London Transport Museum. The building that now houses London Transport Museum was designed as the dedicated Flower Market by William Rogers in 1871. For the next hundred years, this was the heart of London’s wholesale flower business, famously trading every day except Christmas. The cast iron and glass architecture has an appropriate feel for a transport museum, being similar to a Victorian railway station. The major refurbishment has respected and rejuvenated the listed historic structure.

The museum’s approach to visual identity echoes that taken by Frank Pick in the early 20th century. This was a wonderful period in British Design where the talents of many exiles from Germany and experimental British designers were utilised by companies such as Shell, The Post Office and most notably London Transport. As Chief Executive of London Transport, Pick employed cutting-edge contemporary designers and allowed them to bring the London Transport brand to life with playful and persuasive creativity. Frank Pick’s strategy worked and led to the implementation of one of earliest examples of a clear and consistent corporate design policy that has survived for over a century and still inspires us today. 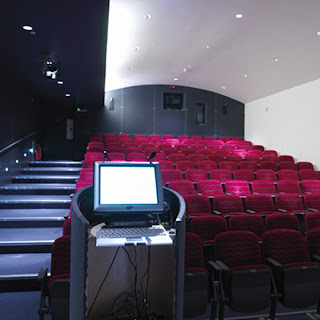 The Cubic Theatre at the Museum

The Underground roundel is still one of the world’s most recognised brands and the famous schematic map of the London Underground designed by Harry Beck in 1933 has become the template for transport maps worldwide. Beck was an Underground employee who realised that, because the railway ran mostly underground, the physical locations of the stations weren’t relevant to the traveller wanting to know how to get to one station from another — only the topology of the railway mattered. Indeed the design has become so widely known that it is now instantly recognisable as representing London. It has been featured on T-shirts, postcards, and other memorabilia. In 2006 the design came second in a televised search for the most well known British Design Icon. It widely cited by academics and designers as a ‘design classic’ and it is due to these cultural associations that London Underground does not usually permit the design to be used or altered for any other purpose. Indeed such was the Underground’s obsession with customer centred design they developed their own “machine typeface” – New Johnston, to make their literature, maps and signage clearer.

It is appropriate then that the entrance to the reopened museum is a ramp featuring metro maps from around the world demonstrating that imitation is the sincerest form of flattery. Video screens embedded inside these maps contain (from Facebook and Flickr) videos of metro systems worldwide shot by users from these countries. At the end you take a lift to the top floor and a journey back in time. In the lift a one-line electronic display of dates comes to rest at 1800 and horses neigh over the sound system as you disembark onto a floor devoted to the transport of that era: including the 1829 omnibus and the horse-drawn tram. You then travel down through the Museum and the ages to the present. New galleries feature original artworks and advertising posters, and explore the extraordinary design heritage of London’s transport system, as well as London transport at war and the expansion of the capital through the development of the London Underground. This is a clever thematic treatment which works well for all ages – the entrance ramp creates visual anticipation and this is maintained throughout the visit by glimpses of the displays on the lower floors which include trains, trams, trolleys and buses from all eras. What is it about these which brings out the kid in all ages? 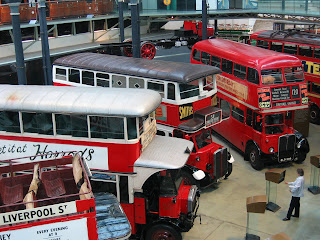 Actors mingle with the visitors, playing roles such as the capital’s first female bus driver. Among the gleaming metal vehicles there are smaller displays featuring poignant personal stories of some of London’s transport workers, like that of John Cunningham, a bus-station worker who bravely stood on the roof of his depot during the Blitz to sound the bomb alarm only to be blown to pieces in a direct hit. The revamped museum contains a third more exhibits than before, including a regularly changing collection of Underground posters, a whole new floor and an underground 120 seat theatre which resulted which resulted in the discovery during building work of 7th century skeletons in the basement, the legacy of a Saxon trading site. 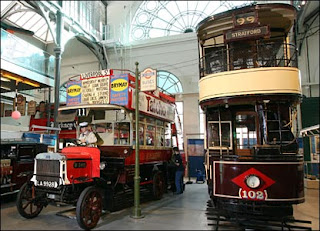 The new museum is brighter than before and allows the atmospheric architecture of the Floral Hall to shine through. It also sets the standard in terms of step free access, disabled toilets and easy circulation throughout for mobility impaired visitors. A pity therefore that these credentials are not reinforced by high visibility tactile signage and clear offers of assistance at entrance points. The public toilet layout is strange as you pass by 5 identical doors before realising the last one leads to the ladies and gents. As these are separate the circulation is wasteful, far better to have adopted the continental unisex layout where they both lead onto a common entrance and washing area. Inside the best which can be said is they reflect the ambience of their counterparts on Underground stations – they are a lost opportunity. The signage to the toilets doesn’t impress and the directional signage in the museum is not too obvious either – no doubt these are teething issues on reopening which will be addressed. 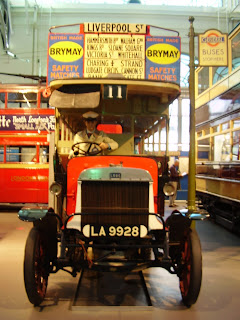 At the end of the tour you exit into a stylish contemporary shop selling an excellent range of designer gifts, books, toys and even furniture upholstered in London Transport moquette – definitely antiques of the future! Upstairs there is the “Collectors Corner” for the hairy’s which has a wonderful stock of the famous Underground posters as well as books, DVD’s, models and memorabilia, many of which won’t be found elsewhere. The best buy is the beautifully produced Souvenir Guide at £5.00 which charts many aspects of London’s transport and its design icons. The only criticism is a publication of this quality should have an index. Also on this level you will find the Upper Deck Cafe and Bar. Run by Searcy’s, who also do catering at the Royal Opera and Buckingham Palace garden parties, this does rather tasty snacks, soups and meals and you could do far worse for a refuelling stop in this area. In the evening the ambience is softer and it turns into an attractive bar, a have from the hustle and bustle outside. 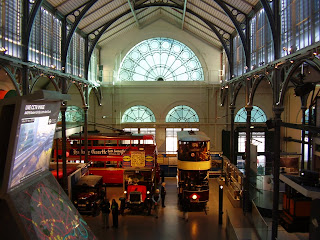 The refurbished museum hits all the right buttons providing a fascinating and interactive attraction for the kids and a fascinating insight into how transport solutions responded to and made possible the phenomenon which is the great world City of London. As Sam Mullins the Director observes in his introduction to the guide: “Transport is what drives cities worldwide. As London grew to be a world city, its citizens moved from walking to using a complex mix of transport modes: rail, taxi, bus, boat, tram, cycle.” 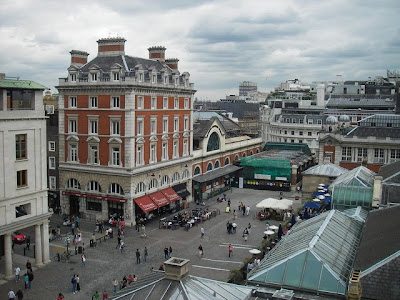