Bob Geldof and Me.

Dublin in the 70’s was a dreary spot. Ireland was in the grip of the old certainties and the thought control mechanisms were still in place. I found myself studying architecture at Bolton Street College of Technology. Here, there were a number of third level courses (Architecture, Surveying, Engineering and Geo-surveying) grafted onto what was basically an inner city college with no campus run by the worthily titled Vocational Educational Committee. It was a clever way of ensuring you had all the disadvantages of university in terms of stress and pressure without any of the advantages of decent campus facilities and a social mix.

However if you wanted to study Architecture you were presented with Hobson’s choice. The only other course in Ireland was at UCD, University College Dublin, and this had been through years of turmoil resulting in it being derecognised by RIBA, the British Architect’s Institute, for poor standards. Either way in those days the grant system in Ireland was so restricted you had to be the 10th son of a smallholder with less than 10 acres to get a grant so student poverty was not an abstract concept. Bolton Street had the other advantage that its fees were a lot less than UCD; the payoff being that very little was provided when you got there.

In 1975 I was Secretary of the Student’s Union and a few of us decided we needed to do something to lift the place so we planned the first “Bolton Street Student Festival”, just like the proper universities had! Being Secretary of the Union was not comparable with Oxford or indeed anywhere else. We had no Student’s Union or Bar but rather had an office in a forgotten room somewhere on the top floor and a Common Room with a shop / snack bar at the back of the canteen in the basement and a modest budget based on a capitation fee. In the previous year we had been at loggerheads with the college on a number of issues with canteen boycotts, sit – ins and all that good stuff. This year everybody wanted a fresh start and the college authorities enthusiastically backed the festival – even they realised a gloss needed to be put on the place.

So the week took shape, parties were organised, an art exhibition was to take place in the canteen, a film week was to take place in the “Kinema”, the only proper lecture theatre in the college, a programme of speakers was organised and we were to have a week of lunch time concerts in the common room. It had some hilarious moments such as the Art Exhibition. One of our lecturers was the well known Irish Artist Charlie Harper and he volunteered to help us get exhibits for the Art Exhibition. 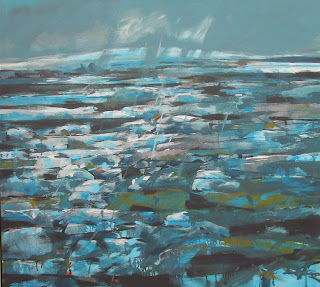 What actually happened was that Charlie and I spent a day touring the art galleries of Dublin in his Renault 4 (with the back seats folded down and Dougal from the Magic Roundabout on the side!). In each gallery the routine was the same. We arrived unannounced, Charlie would be greeted warmly and introduce me, we would be offered and take a drink, explain why we were there and eventually leave with 2 or 3 paintings by well known artists from the gallery stocks. By nightfall neither Charlie nor I were in good condition and I crashed on the floor of his mews in Monkstown whilst outside there was a Renault 4 parked with 25 valuable paintings. All this lending of paintings was done without one shred of paperwork or indeed insurance, we must have been mad!

Three of the group which became the Boomtown Rats were studying at Bolton Street. Pat Cusack, (aka Pete Briquette) Gerry Cott and Johnnie Moylett (aka Johnnie Fingers). Gerry approached me and said he was in a band which had gone down a storm at student gigs called the Nightlife Thugs. I never heard of them but he was anxious to do the gig so I offered him our standard fee of 30 pounds which he accepted. The Common Room only held 300 and 20p was the most we could charge.

On the day of the concert the Common Room had filled up with apprentices. I should mention these were all big guys who wore Boiler suits and generally walked around with vice grips and wrenches! Just 15 minutes beforehand this tall dishevelled guy wearing boots and an ex-army greatcoat came up and asked to talk to me. He said he was Bob Geldof the leader of the band, he hadn’t known the fee was so little and there was no way they were going to play for that sh#t money! My mind immediately turned to the common room full of oil stained monsters and the consequences of the gig not going ahead so after some haggling I agreed to double it to 60 pounds. We shook on this and he then mentioned that I was to introduce the band as the “The Boomtown Rats” as they had now changed their name. The name came from Woody Guthrie’s autobiography “Bound for Glory” and belonged to a gang formed by the kids of newcomers in the oil boom in Oklahoma City who were excluded from existing gangs.

So that was how in October 1975 I became the first victim of the now famous Geldof “give us your effing money” technique and nervously I went in front of a common room of oily monsters and for the first time ever introduced the Pop Group “The Boomtown Rats”. Can I tell you it was a wonderful gig? Well no actually, the acoustics were horrible in the bare brick walled Common Room but even still the Rats, whilst making lots of noise, were bloody awful. Some of the audience did start dancing and saved the day but I was mightily relieved that the first historic gig by the Boomtown Rats didn’t end in a riot. Bob describes the occasion in his 1986 autobiography “Is that it?”

“Well, if you’re so bloody clever, you go and talk to them.”

“I did, but my bluff was called. When I said that 30 pound was an insult and we wouldn’t do it for less than double that, the college promoter said: “All right, 60 pound then.” We were committed.”

So this insight into our respective negotiating skills probably explains why Bob Geldof is a millionaire and I’m not! I become part of pop history and Bob can’t even name check me in his book! After all these years am I not entitled to ask the question “Is that it?”