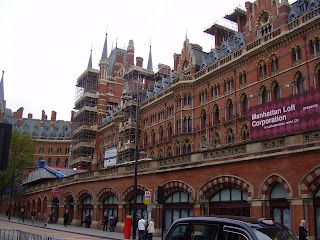 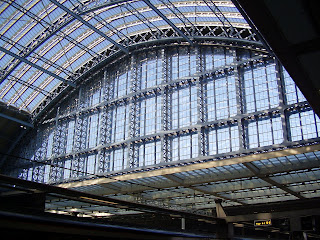 When St. Pancras train station opened in 1868 there was no finer railway terminus anywhere in the world. The view down Pentonville Road towards the great gothic facade of the Midland Hotel at St. Pancras was one of the archetypal views of London. Outside it spoke of the confidence of the Victorians and it was designed to make the public accept the new fangled rail travel as the way to go by associating it with images of past greatness. The Train Sheds were the Victorian’s cathedrals, stunning the public with their scale and the beauty of the engineering and frequently suffocating them with their sulphurous interiors! 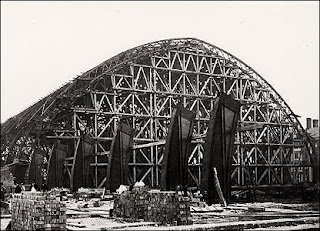 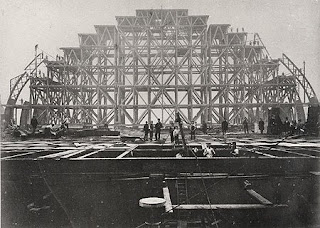 The construction of the Train Shed

St. Pancras was a difficult station to design and build. The sloping and irregular form of the site posed certain problems but the Midland Railway directors were determined to impress London with their new station. They could see the ornateness of Euston, with its famous arch; the functional success of Lewis Cubitt’s King’s Cross; the design innovations in iron, glass and layout by Brunel at Paddington; and, significantly, the single span roof designs of John Hawkshaw being built at Charing Cross and Cannon Street. 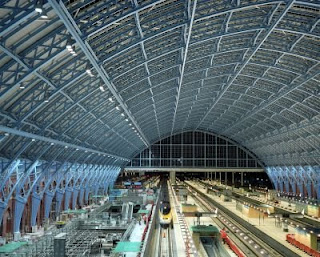 St Pancras train station was designed by William Barlow in 1863 with construction commencing in 1866. The famous Barlow train shed arch spans 240 feet and is over 100 feet high at its apex. On its completion in 1868 it became the largest enclosed space in the world. One of the most recognisable features of St Pancras station today, the red brick Grade 1 listed Gothic front facade was created as part of a competition in 1865 and became the Midland Grand Hotel designed by Sir Gilbert Scott and built between 1868 and 1876. It features stunning gothic revival interiors similar to the House of Commons. 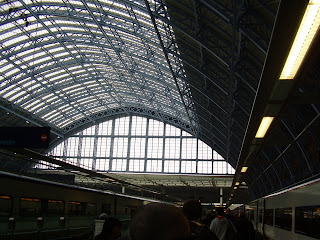 In 1935 the Midland Grand Hotel was closed and the building became railway offices known as the St Pancras Chambers. The station performed an important role during both world wars, acting as a meeting place for troops, a departure point for soldiers off to war, and to help transport children out of London to the safety of the countryside. During WWII the station was hit during the Blitz on London. Despite the devastation, London Midland and Scottish Railway engineers soon had the platforms working again.

The greatest threat to the station came in 1966 with plans to amalgamate King’s Cross and St Pancras. However public opinion had been sharpened by the appalling demolition of Euston in 1962. Back in the early 1960s, high Victorian architecture was widely considered to be hideous, fit only for demolition. Many key buildings were lost. Next in line, the highest of high Victorian, were the smoke-blackened, sinister turrets of underused St Pancras, right next to dour old King’s Cross. With the railways long since nationalised and passenger numbers falling, what need for such duplication? So, in 1966, a merged station was mooted; the wrecking ball was readied. The great poet laureate, Sir John Betjeman and the Victorian Society took up the cause to protect the station and in 1967 the Government listed the station and hotel as Grade 1. The St Pancras Chambers were used as BR offices until 1985 before falling vacant in the late eighties. In the early nineties emergency safeguarding works were undertaken to combat roof leakages and general decay. 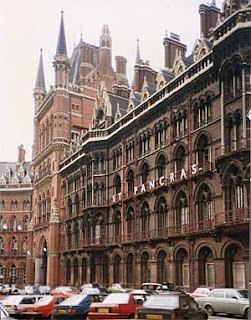 However by the early 1990’s St. Pancras presented a dispiriting vista with the Midland Hotel unused except by the pigeons who made it London’s largest pigeon loft. Behind it Barlow’s great train shed was a murky and neglected shadow of its former glory housing Midland Mainline train services to Leicester and Sheffield.

All this is now about to change after an 800 million pound refurbishment which will transform St. Pancras into London’s gateway to Europe hosting direct services through the channel tunnel to Paris, Lille, Brussels, Lyon and many more destinations. When finished the new St. Pancras Station will be part of a new transport hub with 50M passengers a year when it is completed – busier than any airport. 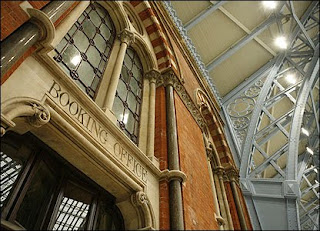 The Midland Railway had a bitter rivalry with the LNER which went into Kings Cross next door so Barlow’s brief was to impress. Unlike the lines into Kings Cross which go in a tunnel under the Regents Canal Barlow brought his lines over the canal giving a wider approach and a lighter feel to St Pancras. To achieve this and prevent a steep incline which would have resulted in the Steam Locomotives ending up on the roadway in front of the station, he built his train shed on an undercroft, effectively an underground goods yard under the station. It is one of the great achievements of architect Alastair Lansley’s design for the restoration is that light is shone on this previously hidden subterranean world and the undercroft is opened up to provide the check-in and arrival areas and retail units for the development. 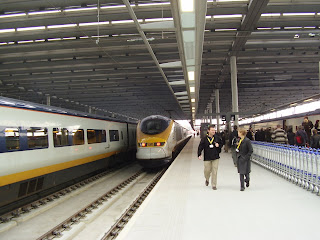 It includes Kings Cross mainline station, St Pancras Eurostar and Midland Mainline, a new Thameslink Station, In 2009 a fast North Kent commuter service to Ebbsfleet, Ashford & Canterbury, the “Olympic Javelin” which will bring you to the 2012 Olympics in 9 minutes and a rebuilt Underground Station with six lines, Metropolitan, Circle, Hammersmith and City, Northern, Piccadilly and Victoria making this the best connected station in London. 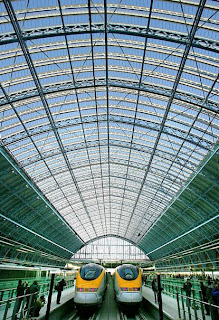 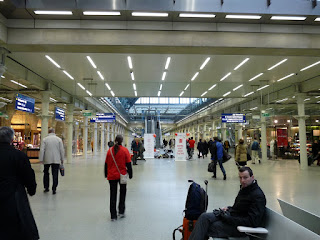 When the first Eurostar pulls into St Pancras on 14th November 2007 this will be the culmination of a project some 10 years in the making. Section one of the High Speed 1Line (formerly known as the Channel Tunnel Rail Link) opened in 2003 allowing Eurostar trains to run at European speeds and standards of 186mph from the tunnel to North Kent before diverting westwards to Waterloo. Section two will now deliver the high speed line through new stations at Ebbsfleet in North Kent and Stratford and via tunnel into St Pancras International. 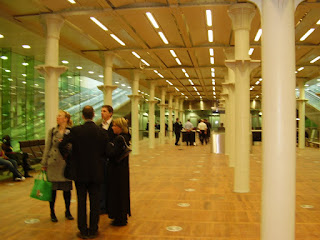 When complete High Speed 1 will significantly cut journey times to Paris and Brussels as Eurostar is finally able to travel city to city at 186mph.

The St Pancras Chambers will be restored into a 5 star Marriot hotel with luxury private apartments on the upper levels. Inside the station there will be many restaurant and retail spaces which will allow the European rail services to compete with the airports including Europe’s longest champagne bar. All this and the advantage of traveling city centre to city centre without the attendant hassle and delays associated with air travel Why would anybody keep flying from London to Paris or Brussels? 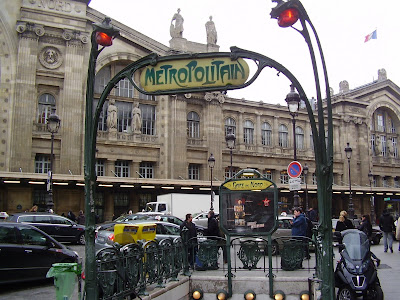 Indeed if the British government did the bleeding obvious, 30 years after the Japanese and 15 years after the French and Germans, and built “High Speed 2” in the U.K. why would anybody fly to Manchester or Glasgow when for 10% of the emissions they could travel in greater comfort by rail? 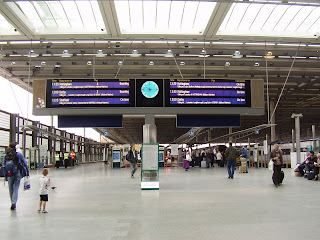 St Pancras Station and St Pancras Chambers are popular locations for film and television productions, appearing in Harry Potter, Batman Begins and the Spice Girls’ first music video and many other movies over the years. 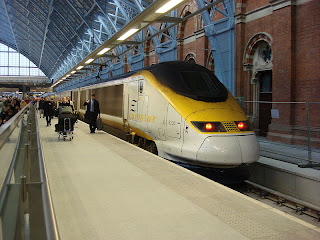 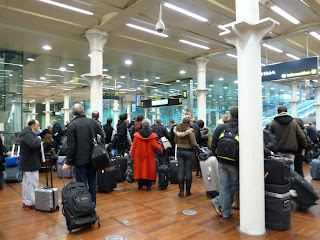 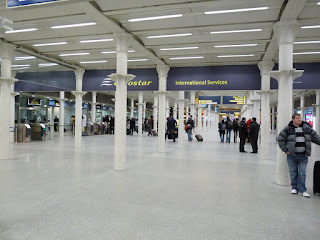 St Pancras remains one of the greatest Victorian buildings in London, with impressive Victorian Gothic architecture. A replica of the famous St. Pancras station clock is currently being constructed and will hang high above the station platform once more when St Pancras International opens in November 2007. The station will be marketed as “The Meeting Place’ with the slogan “Meet me at St. Pancras”. To reinforce this theme there will be a nine metre high sculpture will son a specially commissioned plinth beneath the new station clock which depicts a couple in a ‘brief encounter’ moment and is the work of British sculptor, Paul Day.

The great railway stations of London are more than part of the fabric of London, along with the wonderful Underground they are what make this mega city possible. It is wonderful to see the grandest of these Grand Dames reborn and wearing a new party frock for the celebrations on the 14th November 2007. 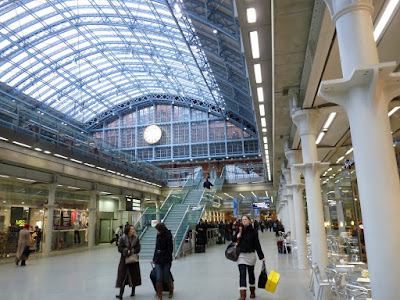 For more on Architecture and Design see ArchiBlogs in the Blog sidebar.